Hello. It's me. It's a rainy Saturday during March madness, I've got nowhere else to be.  The closets are organized, Rice Krispie Treats are made, taxes filed, and I'm feeling a bit sentimental, so here I am. Back at the blog.

Last I wrote was November 2014 - six months after Dan died, about fifteen months ago now. The title of that blog said I was coping and when I think of that time, it's the perfect verb. Since then, I've moved forward (as we say in the biz) and I've accepted Dan's death, I've found the new me, the widow me, the single me, and I like her. I got a grief counselor, bought a new bed, new furniture, strategically cleaned out Dan's things from our drawers and made them mine. I rekindled my social life. I started dating. I'm okay. And I'm making Dan proud.

Grief is an evolving thing. It's cyclical and predictable. It's rational. But it is erratic and abrupt, too.  I had a fever yesterday. I went to the closet, grabbed the canvas bin off the top shelf, and set it on the table to dig for the thermometer. About a second after I put it in my mouth, a thought hit me - "the last mouth this was in was Dan's" - and I welled up with tears. I had a low-grade fever, but that suddenly became a low priority as I rummaged through the rest of the bin to force myself on a walk down nightmare lane. Syringes to administer medication, a small plastic bin from the hospital, about ten rolls of medical tape, various vitamins, thermometers, and some supplies to care for Dan's port were just lying there. They've just been sitting in that bin for almost two years now. That thermometer used to be a fixture on our coffee table, that tape a staple of our daily port care routine. And now they're just reminders of a life I can hardly relate to anymore. I could have thrown it all away, but I didn't. The canvas bin is back on the shelf, exactly how I found it.

That low-grade fever, that brief glimpse into my old life, sent me into a grief relapse. When these happen now (thankfully much less often than before), I tend to scroll through old pictures on my phone and re-read old blogs. The difference in how I feel grief now from in the first year or so is that I have more control over it. I don't necessarily know when it will come, but, when it does, I can control it. I have a plan, I feel the grief, and then it passes. I text one of Dan's friends to say how much I miss the old days or I call someone to reminisce. I write down my feelings or sometimes I cry. But it no longer debilitates me. It doesn't ruin a day or drive me to cancel my plans. I don't know if I'll ever completely escape the painful waves of grief, but I've gotten to a pretty good place in handling them and don't live in fear of the next one anymore.

Dan is still so much a part of me. So many things remind me of him. I miss him. I talk about him to new people I meet. I share our story. I found a way to live our "ALL will be well" mantra and how to find hope amidst loneliness and fear. I'm finding happiness after loss. It's been, and continues to be, hard work. It's been humbling. It's been impossible at times. In one of my last conversations with Dan I told him I wished he didn't have to die. At that time, he was a little disoriented and wasn't able to communicate much, but his response was still profound and has given me peace as I reflect on it.  "I wish you didn't have to deal with it. But you'll be okay." Although simple, his words let me know he was at peace with dying and that has strongly resonated with me. And, as usual, Dan was right. It's been quite a journey, but I'm okay. I'm finally okay. All is well. 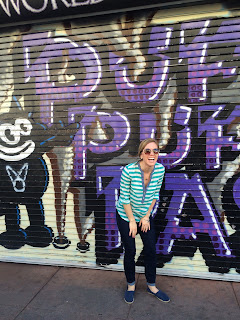